As part of the 2022-23 State Budget, the McGowan Government will allocate $78 million towards the Lumsden Point development to grow capacity at the Port of Port Hedland.

Lumsden Point will facilitate the export of battery metals such as lithium and copper concentrates, the import of renewable energy infrastructure, including wind turbines and blades, as well as support the rapid growth of direct shipping services to the Pilbara.

Works are expected to start later this year. They include the construction of seawalls to form laydown areas adjacent to the future wharf, as well as a causeway to connect the wharf and laydown area to the proposed logistics hub. The works will also enable dredging of the berth pocket and turning basin.

Growing the capacity of Pilbara Ports has been identified by the independent Infrastructure Australia as a national infrastructure priority. A recent ACIL Allen report found the development of Lumsden Point would boost Western Australia’s Gross State Product by $9.5 billion and create 460 jobs per year.

Lumsden Point forms part of the recently completed Port of Port Hedland Development Plan Review, which was undertaken in order to maximize export capacity at the port.

Ports Minister Rita Saffioti said, “The McGowan Government is committed to facilitating the expansion of trade in the Pilbara, with Lumsden Point to become a multi-user facility and logistics hub that will facilitate growth.

“This strategic development will create new export pathways, jobs and revenue streams that will benefit not only the WA community, but Australia as a whole. It will also serve to cement WA’s reputation as the engine room for the Australian economy.”

Pilbara MLA Kevin Michel said, “This critical economic infrastructure will also enable the expansion of direct shipping services from Asia to the Pilbara, with the Port of Port Hedland seeing an increase in container volumes over the past 12 months, resulting in lower costs for businesses and consumers.

“Lumsden Point will become the main export pathway from the Pilbara for battery metals and minerals, with growth of lithium and copper concentrates, which are used in the production of electric vehicles.”

US Grain Shipments Through Great Lakes-Seaway Up 39% 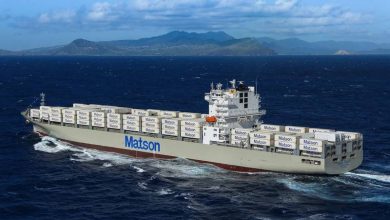